Manmohan Singh got installed as Prime Minister of India in 2004. Most of the intellectuals sighed relief. They were perhaps not prepared to see a country with Sonia as Prime Minister. Many including myself thought the model of putting the technically best person might be a better route with deteriorating images of politicians. I wrote too. But has not the experiment failed?
For some time now I have writing and expecting that a technocrat like Manmohan must take a plea such as deteriorating health and leave. With passing days many are expressing doubts about his effectiveness. Recently I saw few interesting views from some.

Shobha De wants Manmohan to take a lesson from Bauji of ‘Paliala House’. I went to watch the movie after reading the column.

Manmohan Singh has to realize this mess is not about just him —it isn’t enough to claim individual moral superiority and go about with his own conduct above suspicion. It is about closing his eyes, looking the other way and keeping mum. He says he has a job to do (darling, please do it!) and he’s not quitting. Fine. Don’t quit, Sir. But could you please get on with it? That dreaded and disgusting ‘C-word’ (compromise ) has been used excessively by the PM. Someone should have told him it’s a lousy excuse to trot out at a time the country needs to hear something better. He spoke about his personal frustration. But what about the collective frustration of the one billion plus citizens of India ? And excuse me, but it sounds bloody awful when a leader confesses he is not ‘as big a culprit’ as he’s made out to be. Reading into that line, it would be fair to conclude we can call him a chhota-mota culprit… not a big one! 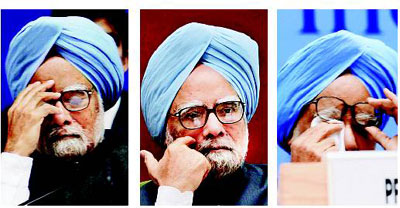 From Times of India

I would have loved to read or hear Shail Chaturvedi or Surendra Sharma, if they have some new on Manmohan.

I don’t think, Manmohan is going to comply anyone.

This entry was posted in economy, governance and tagged ManMohan. Bookmark the permalink.