I came to know about Dr. Sudarshan Sinha only from Kamkhaya as grandfather of Alpana. Kamakhya was trying to get Alpana married to Rakesh, my eldest son, sometime in early 1990s. I met Dr. Sinha first time during the Tilak ceremony when he came to Hind Motor colony’s residence that night in 1993. I met him again in Jamshedpur in the reception of the marriage on January 27, 1993. 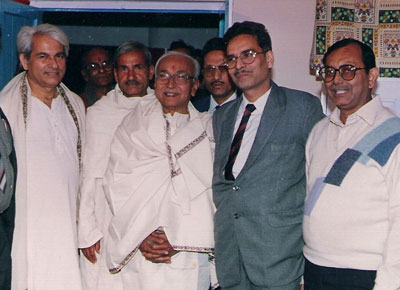 I got impressed by his humility during the few minutes of our conversation. Later on, I wrote some letters to him too and he had replied graciously. I still remember one that I wrote when he was ill quoting some slokas of Gita with curative quality. As a reputed physicist, he might have laughed at it.

I am, no way qualified, as otherwise to write about him. But I don’t know why for some time I am thinking to write about him. I have tried to get documents, writings, or photographs from his son and grandchildren. Dr. Gopal Sinha, his eldest son handed over a book before I was leaving for US this time and some notes.

According to Dr. Gopal Sinha, Dr. Sudarshan Sinha had his primary schooling in a village school at Rupauli, followed by the high school at Samastipur. He got married before he did his Matriculation in the year 1934, the year known for the devastating earthquake. But for the scholarship offer to pursue studies after matriculation, he would not have been allowed to go to Patna Sciencc’e College. He always topped (Bihar, Orissa and Nepal). He was awarded four gold medals. His roll No. was 13. He never talked about his exemplary performance. He was very modest. He used to only smile, if someone reminded him of his past. There are many anecdotes, which his friends (usually eminent professors of Physics, Chemistry. Mathematics, Engg. and Medicine had told us. His capability to solve complex mathematical problem without pen and paper was miraculous. He used to help Math.’s expert in for solving their complex problem.

CA Yashvant Kumar wrote from Mumbai in response to my request to the community members through an e0mail to the group and promised to send a written note, but didn’t even after few reminders.

Sir, I guess you want information about Dr. Sudarshan Sinha, a physics scholar, Principle at TNB College Bhagarlpur, Vice-chancellor of erstwhile Bihar (now Bhimrao Ambedkar) University Muzaffarpur, Patna University, Chairman of Bihar School Examination Board, UGC Member etc. Before death, he was residing in Patna. If my guess is correct, I belong to his clan and village called Bathua Buzurg, Distt- Samastipur. If yes please let me know, I shall make a write up.

Before I left for US in September 2010, Dr. Gopal Sinha gave me a book ‘The Vice-Chancellors Remember’. It has a very nicely written article written by Late Dr. Sudarsan Prasad Sinha, ‘Daring the Discord’ reminiscing on how bad was the condition of Bihar University and the way politicians and union leaders interfered.

I wonder Dr. Sudarshan Sinha would have been more widely known in the country or abroad if he would not have from a rural area of Bihar. I would also like to know more about his work in UK and USA. Why did he return? Did he pursue his research in India? I also wonder when a father does everything in his capacity to get his sons well placed in life, why do the sons don’t do something to keep the memory of their father alive in the public mind.