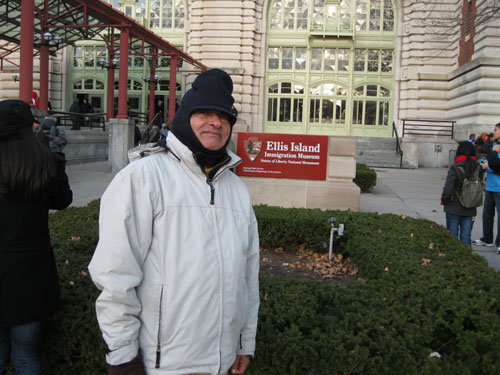 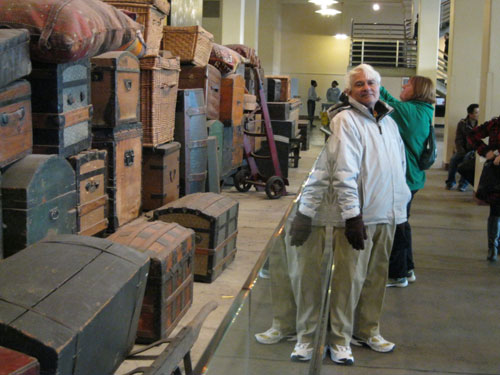 On Friday, December 3, Shephali had brought a copy of New York Times for me. However, I could go through it only today, December 5. We spent the whole of Saturday in visiting Statue of Liberty and Ellis Island and experiencing the cold windy climate of New York. But for the interferences of Rajesh and Shephali for putting on extra clothes, it would have been really difficult. I could realize that I have gone really old and cold too.

I bought a book on Ellis Island that cost me about $27 for keeping it with Svanik to read. When I told him that he was really very happy. I am trying to bring him closer at all cost and he is responding as Emma did.On that cold windy day too, all the visitors were very busy in photographing or getting photographed. I wonder why one should do it for record, Google has million or more of the images of the both.

Coming back to something serious I find American media a little more respectful in covering Indian stories. NYT has a well written article, ‘Indian state Empowers Poor to Fight Corruption’. It’s all about the way Andhra Pradesh government is trying to handle the issue of corruption in NREGA, the government programmes for the poor. I wonder what stops the other states to follow the model or some better models unless the ministry of the states and its bureaucrats, the elected representatives at grassroots level or the petty officers supervising the programmes along with some unscrupulous lazy beneficiaries themselves are interested in making it fail to serve the bigger purpose. Andhrites forming a large percentage of Indian immigrants in US would certainly feel happy to read the report.

After going through the article, I went to see my e-mails. Anand had posted a report from The International Herald Tribune, ‘The face of scandal in India ‘knowing my interest. It was about a scandal that revolves around Barkha Dutt of NDTV. I don’t like most of these distinguished reporters, be it Barkha Dutt, Rajdeep Sardesai, or even Karan Thapar. They appear to be arrogant. And a good journalist need not be that. Perhaps the best example is Pranay Roy, the boss of Barkha Dutt. Is Barkha really involved? Has this report resulted from the professional enmity or jealousy? How will Barkha Dutt react to this?

Most of the educated lots in India consider media as the last hope for a democratic India. I never thought them to be mischievous and involved in promoting business men so blatantly.

Should I change my opinion and give up the hope?

This entry was posted in social issues and tagged Media. Bookmark the permalink.