While visiting Dwarka, we heard two clearly different mythological stories that are the two aspects of the regional economy. Each story is unique in itself. All the priests and pandas in Dwarka talk of the curse of Durbasha Muni resulting in the infertility of the land in the region and the resulting poverty of the farmers. They give this story and ask for all sorts of charity from the pilgrims of different categories to help the people, particularly the Brahmins of the region. The higher the charity in cash or kinds, the better will be the gain. It is just the clear exploitation of the poor believers from all parts of the vast country. However, I assume the land has gone infertile because of the salinity of the seawater that floods the region regularly. It requires a specialised R&D initiative from agricultural scientists to help the farmers to plant the right types of plants, trees, and to have special breeds of animals including cows and buffaloes. 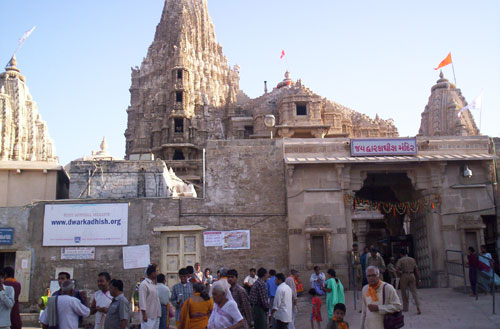 I heard the other story too from the police officer accompanying us in ‘Bhent Dwarka’. According to him, Krishna himself came to attend the marriage of the daughter of his devotee Narshi Mehta. When the in-laws of the daughter wished for some dowry, Krishna did a miracle and gold rained from the heaven for an hour. All present could collect the gold as much as they wanted. Though it may not appear to be so from the overall appearance, every womenfolk in the region owns gold worth more than 3-4 lakh at home. Gujaratis in general are pretty rich. Gujaratis have been migrating to all parts of the world from ages. Today, Gujaratis control the majority of hospitality industry in US and the diamond business of Antwerp, Belgium. Migrant Gujaratis have also contributed to tranform the regional economy through their charity and philanthropic work of building schools, hospitals, and other religious institutions.

For ages, the region has been the nerve center of Hindu cultural history. Surprisingly, I was told, 75% of the Bhent Dwarka island population is Muslim. Most of the shopkeepers serving the gods and goddesses of the temples by making their dresses and other utilities are also Muslims.

While returning from Bhent Dwarka, we visited Rukamini Temple. Rukamini was one of the main queens of Krishna. Rukamini had to spend some times living alone away from Krishna because of the curse of Durbasha. The temple is having a lot of vacant land around it. If some individual or institution takes entrepreneurial initiative, the place can easily be transformed into a wonderful tourist destination. Why can’t the BJP-run government do it? Is its love of Hindutva is limited to Ayodhya temple? Perhaps they too wish to decide their all action plans as secular, however necessary it may be for the people or the economy of the region. As I hear Modi has changed the Gujarat in more than one way. However, there is no perceptible change in the conditions of these places of religious importance. His government must take lessons from Tirupati and Vaishno Devi. An imaginative investment in religious tourism can create employment and bring prosperity to the region. And I am sure he will not relish the crowd of the beggars near all these places. I am giving below one that we saw at RukaminiTemple. 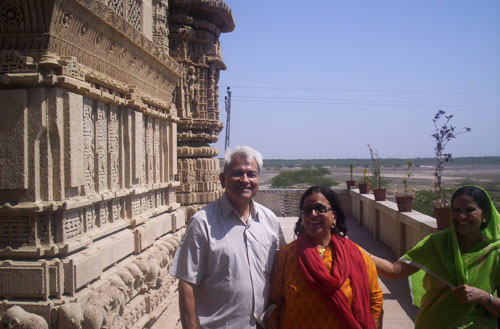 Main Dwarka temple is elegant and a showpiece of architecture too. Its location on seashore further adds to its scenic beauty. It could have attracted all the affluent Hindus from far and near for religious tourism. But encroachment right up to the boundary of the temple conceals the temple to great extent. Perhaps, it can no more be possible. However, the government, the temple trust, or local bodies must do some serious work using some consultants to make the place attractive. Dwarka can earn a lot of revenues from tourism.
—————————–
Read ‘the season for business marriages in India’