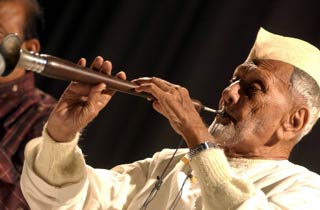 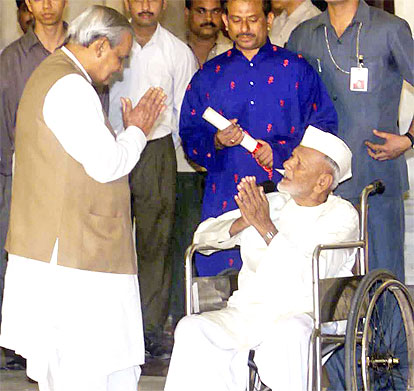 Many years ago, I had heard him at a musical function in Netaji Auditorium in IIT, Kharagpur. Again, at Hind Motor auditorium too I could get a chance to hear his divine shehnai and talk to him. I was happy, as he told, ‘I am from Dumraon’. His simplicity moved me. Dumraon was a small kingdom once. It is near my mother’s village. He talked for quite some time. I started tracking news concerning him. Perhaps he lived like one phakir, unlike other Bharatratnas. It was evident from the photographs appearing in media. He kept on saying, “So long as the shehnai is with me, what need do I have for anything else?’

‘Telegraph’ called Bismillah the Saraswati devotee who lived for his Ganga.

On the fifth and eighth day of every Muharram, Ustad Bismillah Khan would come to the Fat-main burial ground, sit under a neem tree and play the shehnai. “Even the average onlooker who did not understand music would be moved to tears,” a local resident said. The open space under the neem tree where Bismillah Khan mourned the grandsons of the Prophet became his final resting place on Monday.

Ustad had played the shehnai when Pandit Nehru unfurled the Indian flag at Red Fort to mark India’s independence in 1947. The devotee of Saraswati, and “a true symbol of our composite culture”, played the shehnai – an instrument that he took out of marriage pandaals to heights of global glory – at the temple whenever he could. Can’t the government build a suitable memorial in form a national institute of Indian traditional music at Dumraon, that still remains rural? Can’t Nitish Kumar, the CM take a lead?

PS Even the gods were happy to listen to his shehnai by Pandit Hari Prasad Chaurasiya
Village, maestro waited for each other

PS When Shehnai silenced the Sitar
A controversy deemed to have been settled in 1950 by SWAPAN DASGUPTA
The Piper Of Banaras: Khan Sahib’s religion was his shehnai’s sweet swaras, his truest namaaz