After his schooling in Arrah and then Sasaram government schools, my grandfather left the village to explore the world outside and find means of earning away from the village. As the eldest son, he could have remained in the village and lived on the farming, but perhaps he wished to find the worth of his education. He left his younger brother to help his father in the management of landed property or zamindari as it was called in those days. As he used to tell me it was really difficult even in those days to find a job.

After unsuccessfully trying with some so-called ‘kings’ in Bihar such as Tekari and Hathua, he came to West Bengal where some close relatives were working. I had met some of them in Calcutta where he took me in my school days. After working at different places for different assignments including one for an orphanage near Batanagar, he came to Birlapur, where Birlas had set up the first Indian jute mills.

My grandfather was the pioneer in starting formal schooling in the industrial town of Birlapur. He started the primary school in labour quarters on the bank of Hooghly that we knew as ‘magazine line’. Later on the company, Birla Jute Mills built the high school inside the company boundary.

My grandfather, Lakshmi Prasad Ray was very popular among all classes of people from general manager to the sweepers in Birlapur. To many he was Ray Babu or Ray Saheb or more formally as LP Ray. He belonged to the era when a teacher was really respected in society. He had helped many senior executives in mills from Rajasthan or marwaris as we knew them to get privately educated, and even pass matriculation examination. Later on he taught their kids at home. But I saw his interest in educating some from the community of sweepers who had come from all the way from Rajasthan for that task that was considered very low in those days, and no local persons were available for that work. I remember one very smart person among them whose name was Babulal. He had taken the help of my grandfather to be literate. My grandfather did also believe and kept on talking of ‘simple living and high thinking’. He loved white and wore only white. And with his moustaches he looked really smart and impressive. He reminded many of Asutosh Mukherji, the great educationist of Bengal me.

I was the darling of my grandfather and I remember many sweet things of those days. I remember I used to lock the front door so that my grandfather would not leave the home without helping me in solving the home tasks from school. I do also remember how I used to go with him to some houses where he used to take tuition. I would fall asleep and he would carry me on his back in late night from the distant place. I used to sleep with him and even in sleep I kept on touching him to find if he was there. In case I didn’t find him, I used to make a lot of hue and cry even at late night. I do also remember how I went to bed very early. And then I would get up in late night and demand food, and my grandmother would give something.

My grandfather shared with me personal information about himself. In early years of the school, he was expected to teach even mathematics in higher classes. He was not proficient enough for that. On every Saturday he would go to Calcutta, sit with some teachers whom he knew and learn to solve the tough questions of mathematics to come back teach it to his students. Gradually, the school grew and became full- fledged up to class X during my days. He remained in the school but only as teacher in upper primary sections.

My grandfather always accompanied me be it the admission in Presidency College or IIT Kharagpur. He would regularly visit me in my hostel and keep on inspiring me. Many a times he helped me in taking right decision too. I have a group photograph for which my grandfather took us to a studio in Dharamtalla Street in my Presidency college days. My maternal uncle, Chandramani Tiwari and youngest uncle, Nand Kishore Rai are there in that. 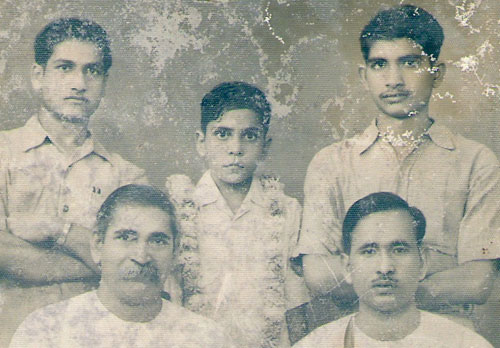 Photo:Standing Nand Kishore Uncle on left and myself on the right
Sitting my grandfather on left and maternal uncle Chandramani Tiwari on right

He could not accompany me when I went to Hind Motor for an interview for getting in as Executive Trainee Engineer. Unfortunately, he got an attack of paralysis on the same day. On my return from Hind Motor, I found him on bed. He couldn’t speak. His right side had been affected. I remained at his bedside and nursed him for a month before I joined Hind Motor. His will power helped him to recover fast. I remember him asking me if it would help taking eggs for faster recovery. Actually, Durga Babu, the aged doctor of Budge Budge General Hospital had joked with him knowing that he had been a total vegetarian all his life.

In late 50s, my grandfather took retirement, perhaps so that Nand Kishore could get an honourable appointment as teacher in his place. But he continued teaching. He got started a school in another jute mill complex in nearby Kalipur whose General Manager was acquainted and happened to respect him.

Before retirement the school authority of Birlapur Vidyalaya wanted one big portrait of his to be placed in its prayer hall. I don’t know when and why that portrait was returned to the family. It is still on the wall of the residence of Pradip, my cousin who still works for one unit of Birla Jute Mills (presently Birla Corporation) at Birlapur. The photograph above is a copy of that. 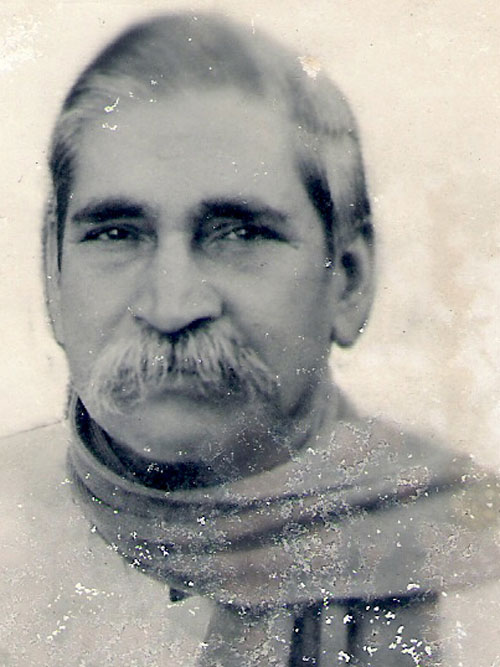 My grandfather always wanted to see his sons in business and prosper. He tried many times. He started a milk business and bought two good buffaloes in Birlapur. He brought his second son, late Raj Kishore Chacha and Maloo, a helping hand from my village. But my uncle couldn’t work hard enough to make it a success. I remember when my grandfather wound up the business selling one buffalo and sending the other one to my village home by train. I saw tears in his eyes. My father used to narrate how he brought that buffalo from a distant railway station near Arrah to our village and the trouble he faced.

My grandfather didn’t get bogged down with the failure. He again invested in opening a hotel in Sasaram. But Raj Kishore Chacha again failed him. As the last attempt, my grandfather after retirement got started a rice and wheat grinding facility for my youngest uncle. I had also contributed the money that my mother had given me and was lying in the saving account at Sasaram for emergency. The uncle started well and it appeared that finally my grandfather would see at least one of his sons succeed. But some envious villagers created problems and the family had to go in long costly litigation, and the attempt failed again for the third time. My grandfather who went to live in the village had to go to Dalmianagar. He again started working in the high school of Shahu Jain Industries there. He was pretty popular there too. I had visited him there once. Yamuna too lived with him and my grandmother for some time. He lived there till last when he had a heart attack while he was going to the railway station with my mother to see her off.

And this was the end of the most important man in my life. I was at that time in Hind Motor.