The year saw a general election, where one old man lost, while the other one own. A deserving Indian owned an Oscar. A person of Indian origin got a Nobel. Indian Chandrayan detected water traces on moon. Indian cricket came to the top. India kept on improving its image at various global meets. However, I want to think back on personal front here today.

Some year in personal life appears to be more satisfying. 2009 is one such year. In early months we had been to Salt Lake, Kolkata and in the concluding months, we took up the tours of Tamil Nadu. The main task at Salt Lake was to explore the possibility of disposing off the property there but only at my target price. It didn’t happen, but then we found it prudent to wind up its establishment that we were maintaining. We rented the whole house. It meant disposal, gifting and shifting of a huge lot of items collected in about forty years while working for Hindustan Motors. However, we could sell the land at Hind Motor that Yamuna had bought for setting up some commercial units if not by me, perhaps by one of three sons. We got a fair price, but there was no pint in waiting with some prospective crook to trouble. 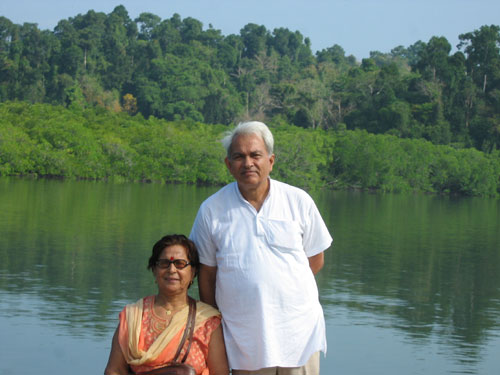 From Salt Lake, we went for a short holiday to Andaman. That was just fantastic outing. I had never thought it to be so charming. Both these trips this year were little different too from the ones undertaken in last few years after coming to Noida, as we did get any other friend or family members to go with us. I think Andaman has not got the attention it deserved over the years; otherwise it could have been envy for many and could compete with Hongkong or Singapore. During my stay at Salt Lake, we visited Birlapur and spent some quality time with Pradip’s family. Pradip is the link of the legacy in Birlapur that my grandfather started. His portrait in Pradip’s residence reminded me of many things of the past.

Tamil Nadu tour was highly informative but very extensive and tiring. Temples of South are just wonderful. Every temple has something unique and special. Meenakshi was certainly the best. And over the years these temples have kept the idea of one India survive. As a good Hindu, one is expected to visit the religious places. Though the purpose is to get rid of one’s sins, but most probably that was the fear feature introduced by the saints to make the people visit different places in different part of the country and see the outside world. The concept of Char Dhams-Badrinath, Puri, Dwarka, and Rameswaram on the four sides of the country, certainly confirms that. And it is happening since ages, when there were no railways. The pilgrims used to take leave from the family members before embarking upon these pilgrimages because of the uncertainly about the returning. I remember my first journey to Chennai and the pilgrims that I met on the station and their problems particularly because of the language. My great grandmother who had visited Rameswaram must have undergone the same agony. Why can’t the politicians understand that and avoid linguistic discouragement against Hindi? Fortunately, with the visit to Rameswaram, we have completed the Char Dham.

My only anguish was the loss of my camera in Tirupati and with it all the photographs in it.

We pray for the next year to be better.