Somnath- Fascinating History>r this place to get rid of the curse of his father-in-law that made him suffer from leprosy. But more horrifying were 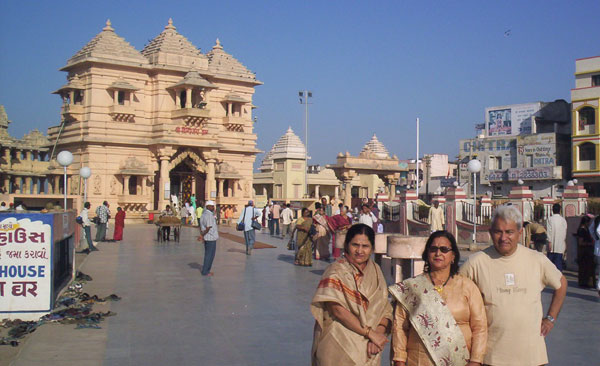 In my school days, I had read the famous novel- ‘Jai Somnath’ written by Shri KM Munsi. The story of the loot of Somnath by Mahmood Gaznavi was also in the school history. It left a lasting impression on my mind somewhere. I had a desire to see the temple reconstructed because of the initiative of Sardar Patel, the Iron man of the country. It materialized during this visit to Gujarat.

From Dwarka, we reached straight into the premises of Somnath via Porbandar. Unlike all other Hindu pilgrimage, The Somnath Temple is a modern one without the pandas. Its location right on the seashore adds to its grandeur. Unfortunately, photography is not allowed. After attending the evening aarati, while we were going around the temple we saw the platform created out of the remnants of the old temples that were destructed. It reminds the past. I came to know from the light and sound programme later, that the first temple, as per mythology and Skand Puraan was constructed by God Moon who worshipped Lord Shiva somewhere nea the stories of the various destructions that the temple underwent. The first one was by Mahamood Gazanvi 1026 AD. Why couldn’t he get satisfied by the huge booty of the loot of the time and spared the temple? Every time the temple got destructed and the Shivalinga damaged, the people of the country rebuilt it. Alluding Khijli destroyed Somnath again in 1298AD. Mahmood Tughlak again enacted the destruction. Jaffer Khan did the destruction next time. Mahmood Begda destroyed Somnath again in 1490 AD. Aurangzeb also issued the order to demolish Somnath in 1704 AD, but unfortunately died before his orders could be executed. What a sad story of a shrine that may not be having another parallel!

Somnath appears to me a memorial of the endevours of the people, who believed in reconstructing it after destruction everytime by some evil minds. It is also a reminder of India that became weak because of fragmentation. Somnath also tells the nation to remain united and strong to safeguard our cultural heritage.
———————————————————
HABITS DIE HARD
India has more billionaires than Japan