While for many causes and on number of issues, the Indian media do a great job and has got the due appreciation too. But on quite a number of counts media appear to be shortchanging Indians.

In last few days, I felt miserable as media didn’t satisfy my expectations that might be of many more Indians too. Why couldn’t media cover the profiles of ‘Padma’ awardees? Padma awardees are supposed to serve as the benchmarks and examples by their deeds for the people of all ages of India, particularly for younger generations who will like to take some lessons from their lives.

Why should it not let the people know how Padma Bhushaan, Mr. O. Suzuki, Chairman &CEO, Suzuki Motor Corporation, Japan, contributed in bringing a new revolution in automotive industry when two local and private manufacturers were controlling the whole market and making the consumers pay for their shoddy products? Suzuki was not the top among the auto manufacturers of Japan, but Mr. Suzuki could India’s latent strength. It was for Maruti-Suzuki that Indian manufacturing sector could learn and master most of the Japanese manufacturing practices that makes it a strong force globally. Example is the highly developed auto components sector, exporting $2.2 billion today and hopes to reach figure of $20 billion by 2015 that grew with Maruti-Suzuki as nucleus. Why should the media not write about the success stories of the visionaries that inform and educate the people, otherwise one day one from the ignorant lot can raise question too? 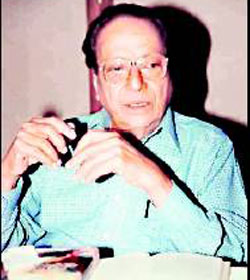 Noted Hindi writer Kamaleshwar passed away on last Saturday. He was a successful and great author of many excellent quality books, short stories, novels, and commentaries with a lot of popularity. He successfully worked in film industry as scriptwriter such as ‘Mausam’. And ‘Aandhi’ with Suchitra Sen and Sanjiv Kumar was based on Kamaleshwar’s novel of the same name. And I am sure many would have enjoyed his Doordarshan show ‘Parikrama’ too. Kamaleswar was impressive. If I am not mistaken, Kamaleshwar also worked as special commentator on special occasion too. Why should English media that reach the most of the middle class of India not cover his death news and come out with a suitable obituary? Was Kamaleshwar lesser in any way with those English writers that are making million these days and all publicity of small screens?

And next comes my worst agony of the day after reading a full throttled story ‘EX &Y FACTOR’ about the India’s top science man, R.A. Mashlekar in one of the few good news magazines. I pity the newsmagazine and the reporter who put in so poor a story just to prove that it is free to print anything about anyone. Instead of writing about the scientific contribution of RA Mashelkar in such a detail, the storywriter has gone by a union leader version of charges that are very usual in any organization. Perhaps, the columnist does not have any idea about the way the union leaders in West Bengal go on charging the management executives. I am sure it would hardly matter, but it is in poor taste and irresponsible journalism. Will the reporter and the magazine try to dig out how all the candidates for the assembly election of Punjab are multimillionaires? If the media don’t help the technocrats, scientists, teachers, and executives become known to the people for the great work done by them and that must be its responsibility, it must not cover such silly accusations that is just personal vendetta and the judiciary would not have admitted the PIL. However, as it appears the magazine is trying to get it branded as one with left leaning. It has published a photograph too with the story where Mashelkar has been shown with RSS leaders giving him some award. However, while concluding the writer says, “the current campaign against Mashelkar is being pushed through by the CPI (M). Left parties have been agitated by the stance that India- and Mashelkar -have taken on the issues of patents, genetic resources and traditional knowledge.” Can some one say why the Congress goes on supporting such an anti-national political party?

I wish media stopped shortchanging the people of the country who still trust it to a great extent.
————————————————————
Read about a Japanese management tool-Hoshin – managing for objectives
See what our moneyed English writers are producing. Mumbai, Meet The Mob