Yesterday strike and its Bengal style have showcased Bengal with its real face that goes unbearable and inhumane when it comes to general protest by CITU. The protesters use all innovations to create inconvenience to the people both domestic and also poor foreigners who have been very lately changing their mindset about India and Indians because of their colleagues in offices back home.

Let us see what happened yesterday. 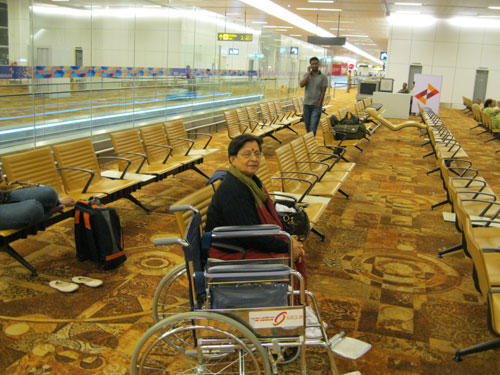 Kolkata airport: Jurgen Vanduffel is having his longest transit ever at any airport across the globe. A professional diving instructor from Belgium, Vanduffel was among the 130 passengers stranded at Kolkata airport due to the strike. ”I knew it is a Left-run state, but had no idea that life would come to a halt because of a strike. Now I can’t even venture out of this place. Imagine getting stuck here without food,” said Vanduffel.

‘This is my first trip to India and may be my last one. How can the government allow the protesters to shut down everything? And if bandhs are like this, we should have been informed by the airline so that we could have decided whether to travel here at all,” added Greg Raymond from Australia.

Writers Building: Buddha Babu spent a full day in office (all alone), but the rest of Writers’ wore a deserted look, as almost all rooms remained under lock-and-key.

Howrah Railway Station: Some local and long-distance trains did reach Howrah station early on Thursday, but it was full stop from 6 am. A few taxi drivers were willing to defy the bandh, but for a fat fee – Rs 900 for Salt Lake, Rs 500 for Shakespeare Sarani…

Sector V- IT City: Despite police bandobast in Sector V, the shutters were downed in a hurry and the autorickshaw drivers switched off their engines as the clock struck 6. “Bandh shuru hoye gechhe (The bandh has begun),” shouted someone. The early hours of hectic activity over, the man in charge of logistics outside Wipro – the biggest BPO outfit in the city with over 2,500 employees – could afford a smile. “Our last pick-up car arrived before 5.15 am. Everybody is in,” he announced.

Durgapur: S.P. Badyakar was stopped around 10 last night when he was on his way to work on his scooter. He had planned to stay at the plant overnight. Citu activists ordered him to go back. When Badyakar said he was a senior executive and wanted to work, the men beat him up. One of his teeth fell out and he slumped to the ground, bleeding. Badyakar was taken to hospital by collegues and had to undergo a minor surgery on his gums. The general secretary of the Citu-affiliated union, P.K. Das, said: “We are ashamed.”

Kalyani: At Kalyani town in Nadia, residents were warned on loudspeakers against letting part-time maids work and all approach roads were blocked. If this was not enough, women activists searched houses for maids and dragged them out. Again, the Citu was apologetic. Sumit Dey, the Nadia secretariat member, said: “What they did was wrong.”

Has Bengal changed? Do you think then that the farmers of Singur have willingly given their lands to the government for Tata Motors? But even with all this Tata Motors is adamant to set up its ‘crown jewel’ plant at Singur.

“NO”
Nemesis of Bengal?

1537
2006-12-15 17:59:20
Indian leader Must Learn from Blair
British Prime Minister recently announced a list of 500 concrete steps, large and small, to cut red tape in the nation bureaucracy. The measures, which range from simplifying forms to providing fire safety certificates more easily is estimated to save individuals, corporates and charities over 14 billion pounds (Rs 119,000 crore). And Blair promised to come out with another 500 administrative ‘burdens’, which would save them another 2 billion pounds.

Are India’s highly qualified and experienced Prime Minister and the Finance Minister, or for that matter the vice-chairman of Planning Commission not aware of the timeworn, and useless administrative procedures that must be costing billions in cost of red tapes? How can India attract the FDI that it is seeking so aggressively, if as per an Assocham, nearly 62,000 proposals, involving a cumulative investment flow of around Rs 1,550,000 crore, are pending approvals from various states and central government for the past 18years or so. ” It is observed that even at 40% fructification of these investment proposals, investment of Rs 644,000 crore can come through, generating employment for about 7.4 million people.” The sectors involved include food processing, textile and clothing, leather goods, automobiles, auto components, minerals, steel, cement, electronic products and components, paper and paper products, chemical and allied products and polymers and plastics. How can one have confidence in the intention of the leaders in the driving seats after going through these reports? Why can’t a proposal that is unacceptable, be dropped?

Why should they waste so much of energy and resources of their own and the country, if they can’t improve the basic requirements for getting the foreign investment? Can the investment climate be called congenial if it takes 89 days to start a business, 67 days to register a property, 425 days to enforce a contract and seven days to a month to clear goods from customs, and almost 155 of management time is wasted to deal with officials? Is it something that the Prime Minister can’t get corrected? Why can’t he confess this?

Though the British Empire where the sun never used to set is dead, but the nation and its leaders are conscious of the competition from the emerging economies specially ‘Chindia’ to give a sharp competitive edge to British business in global trade. Chancellor Gordon Brown, the next prospective tenant of 10 Downing Street has been talking of the threat, ” Once responsible for just one-eighth of the world’s growth, China and India will soon capture almost half. They are competing not just on low cost, but on high skill.” And that is reason for the steps to cut the prevailing red tapes. The nation is preparing to face the challenge. For information, in the same process of restructuring the administration, UK is having an ambitious target to cut unnecessary bureaucracy by 25% by 2010. At least it appears the national leaders of UK are following the strategies necessary to correct the situation, if it is bad and correctible.

Why can’t similar steps be taken in India? Why can’t India take a cue from the story from Britain that has given India the present bureaucracy as legacy and act?

The battle on Singur is hot. Left government of West Bengal has gone all out to show the strength of its cadre and police force. Against all odds, it has acquired the huge area of land about 1000 acres from farmers and has also got it fenced. It never asked even why should Tata Motors need so much of land. Ratan Tata is busy with Corus. MD, Tata Motors is enjoying the battle royal between Mamata and Buddha. But perhaps all the preparations are as per schedule and going on simultaneously in Tata Motors Pune plant. As I wrote earlier, the Tata’s dream car project can be revolutionary and change the confidence level of the manufacturing sector of the country. I wish Tatas would maintain its quality and would provide the customer service to the worldclass level. However, I am still very much skeptical about the work culture of West Bengal even today and the way its trade unions maintain control over every activity of the management on shop floor level. It damages the basic discipline among the workforce that is necessary to get the best contributions from the people directly on the job. I think Tata Motors must have developed expertise in handling the irritating labour conflicts. Some one in Tata Motors must be totally sold on West Bengal; otherwise it would have not selected Singur. Even today, the state goes for very frequent strikes or bandhs for reasons best known to the leaders of the political parties. And in the state the strike is always total as it’s state sponsored in most of the cases. No one can dare to go for any work outside the house, if there is strike. Even train, airport and all transport are dead.

I am also eager to see the ultimate result just for technical reasons. I am really sorry that a company like Tata Motors has no consideration for the farmers who shall be loosing their land and its agricultural produce. Why can’t such a mechanical plant be located in the desert of Rajasthan on the Delhi- Mumbai wing of of GQ? Will it any way affect the efficiency of the operation or the supply chain? Unfortunately, the wrongly directed competition between the states of the country is causing the problems. The smarter states rather smarter political leaders are trying to bring in all the industrialists to invest in their states by offering all sorts of allurements. The other day I saw Tata Motors’ another plant coming up on the very fertile land of Uttaranchal for manufacturing the mini-truck that has become very popular. The country can’t get the replacement of the fertile land producing different grains, though the plants can come up in many locations in the country without much difference in operational efficiency.