Tajmahal has always allured me. I can’t forget the fullmoon night of 1965, when I got its first glimpse the whole profile emerging from darkness with the moonlight gradually increasing. I have not missed any chance to visit it. Every time it has been fascinating. Here is a story that appeared in ‘Outlook’, but I wish to share it though in brief. 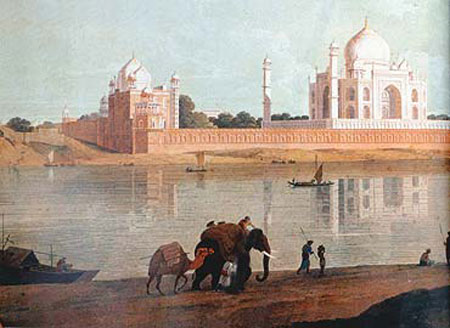 Shah Jahan picked the site for Taj for its great view from Raja Jai Singh of Amber, in exchange for four mansions
Mumtaz Mahal’s body was moved thrice: from Zainabad garden to the Taj complex and finally inside the Taj
Mumtaz shares the Taj complex with two begums Shah Jahan married after her death
When finished, Shah Jahan visited Taj only twice. His own burial was not grand-he was taken quietly by two men by boat and laid beside Mumtaz.

The French physician Francois Bernier wrote in his ‘Voyages’ wayback in 1699, “I decidedly think that this monument deserves much more to be numbered among the wonders of the world than the pyramids of Egypt, those unshapen masses which when I had seen them twice yielded me no satisfaction.” And Bernier also mentions that he went to see the Taj with a merchant from France “who, like myself, did not tire of looking at it”.

However, Austrian art historian Ebba Koch has some revealing facts about it in her new book, The Complete Taj Mahal.

According to Koch, the building-obsessed emperor had wanted to create: a monument that would be unrivalled in beauty and grandeur for all generations to come.” It will,” in the words of his court historian Muhammad Amin Qazwini, “be a masterpiece for ages to come, increasing the amazement of all humanity.”

The emperor brought Mumtaz’s body from Berhanpur where she was originally buried to the site of Taj. She was buried for a third time in her final resting place, nearly 12 years later when the Taj was completed. And what was the real passion? It perhaps, was Shah Jahan’s ambition to go down in history as the world’s best builder. His biography, Padshahnama-written by a series of carefully chosen historians-goes into extraordinary detail about the emperor’s broken heart, including how his beard turned white overnight. But that did not stop the emperor from marrying twice after her. Both these later wives-Akbarabadi Mahal and Fatehbadi Begum-ended up sharing not only the emperor’s heart but also Mumtaz Mahal in Taj too.

Just the selection of the site, for instance, took him nearly six months.

“Shah Jahan knew nothing makes an impression stronger than sheer size, so he decided to build a complex that was almost a kilometre long.,”

The emperor got enshrined through the daily meetings with his team of architects the classical symmetry in Taj.

Shah Jahan also took great pains to ensure that his Taj would last forever. Contemporary sources have recorded how wooden wells were sunk into the ground to replace the sand with gravel and concrete to reinforce the foundations of the building. He succeeded in erecting a building that could withstand earthquakes and floods that conservationists today are awestruck at its extraordinary stability.

And then the white marble used creates the ultimate impression of its magnificance.. Koch says she stood at the gate of the Taj and took photographs every hour to document the change of light. She understood the feeling that it aroused in Bernier that he could look at it without ever tiring. “It was meant to make a powerful impression at any point of the day,” says Koch.

But, Koch’s vote for Taj as the top wonder of the world is because of its seamless fusion of many different architectural traditions.

1.There is the Hindu concept adapted from the vaastu shastras of using only two colours: brahmanical white and Kshatriya red. “With this Shah Jahan was declaring that the Mughals were the new Brahmins and kshatriyas of India,” Koch says.
2.Then there’s the European pietra dura work that surpasses in its ingenious crafting the original from Italy.
3.And, of course, the Islamic elements are also there.

This incredible fusion of so many styles has given birth to innumerable claims about its origins: the early myths about how the architect was an Italian goldsmith named Geronimo Veroneo and how in the eighteenth century a Brahmin priest in Suraj Mal’s court suggested converting the Taj into a temple, not to speak of P.N. Oak’s more recent claim that the tomb is really Tejo-Mahalaya, a Shiva temple.

But the most startling revelation Koch has unearthed is a caravenserai- four open-air squares, where travellers could pitch their tents and unhitch their animals-edged with shopping arcades. “I don’t think there is a monument anywhere in the world of its age or even later which had these tourist facilities.” The idea was to finance the upkeep of the Taj with the revenue from the shops and provide shelter for travellers who would come to admire his masterpiece. When Shah Jahan decided to build a monument of love, it’s anyone’s guess who he really had in mind: Mumtaz Mahal or the tourists of the 21st century, or ever after.

Taj Mahal is a finalist among 21 other sites in the biggest global poll ever, spanning seven years and 20 million voters to pick the world’s New Seven Wonders. The Swiss non-profit organisation, New7Wonders launched the campaign in 2000. The final result will come only in next July in Lisbon. Will Taj be among New Seven Wonders? Will Indians and Taj lovers allover the world, make it find a place?