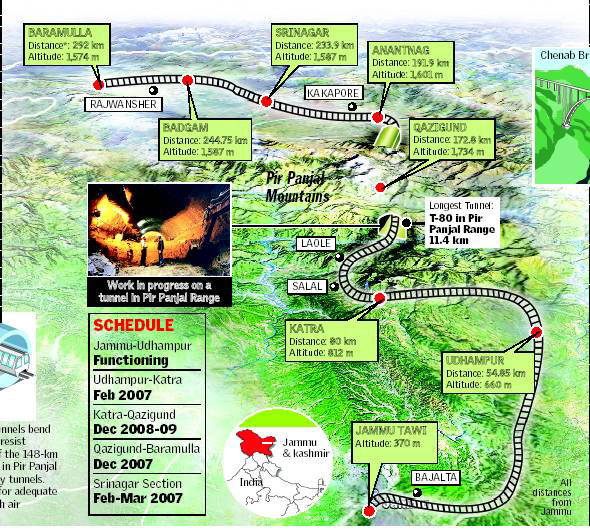 As reported byManeesh Pandey & M Saleem Pandit in ‘Times of India’, Indian Railway is in process of connecting the Kashmir Valley with the rest of India. A train will traverse the spectacular Pir Panjals and take tourists into the Chinar-lined getaways. Will that not be a great day for the lucky ones in the first train? The project faced many odds, even attacks of terrorists and also many a civil engineering challenges. Many expressed doubts of its viability in an earthquake prone area. However, as claimed, the design is good enough to withstand any seismological disturbances up to the magnitude of 8.5 on the Richter scale.
The powerful earthquake of October 2005, with epi-centre in PoK, was of the same intensity as the Gujarat quake of 2001, but “the construction sites and various installations completed till that time remained unmoved.” As claimed, with the latest quake-resistant technologies incorporated design and construction, the rail link will be robust to meet the geological demands and contingencies.

5,000 more people will man the running of trains, maintenance of tracks, tunnels, bridges and commercial activities

First-ever heated coaches will run on Indian tracks as at many places, the temperature is sub-zero

Around 40 trains can run both ways on this section daily

For communication in the hilly terrain, optic fibre network are being installed

Bridge columns are powered by encasing them in steel jackets or fibre mesh. Scientific tests are being conducted on Chenab Bridge to check if it can withstand high-speed winds. Flexible joints will let tunnels bend with quake motion and resist breaking. About 83% of the 148-km Katra-Qazigund section in Pir Panjal Range will be covered through tunnels with adequate ventilation to let in fresh air.
Jammu-Udhampur line has been in operation since April 2005.

Starting February, the train will begin its run through the harsh terrain from Kakapore to Rajwansher, via Srinagar. And within little more than a year, the entire stretch between Jammu to Baramulla will be ready. The first train – from Qazigund in Anantnag to Baramulla is scheduled in February 2007. Katra-Qazigund is expected in December 2008-09.

Kashmiris are upbeat. For many, “it’s a train to economic prosperity.” “We eagerly await the arrival of the first train which will bring employment opportunities.” ”The train link will facilitate easy movement of commercial goods even in harsh cold weather when roads get blocked due to heavy snow.”

However, the terror threats will remain something to be watched. Can the railway link embolden the hearts of Kashmiris to face the threats from those encouraged to create troubles from across the border?

I wish the design of the rail-link would add some uniqueness and grandeur as architectural showpieces and wonders of civil engineering that will further improve the attraction of the heaven on earth.

I fully believe that with good governance, employment creation, careful handling, and mass education, the terrorists can be won over. Will Laluji be able to take credit of the project by completing it within his tenure as Railway Minister?