As I spent almost whole of my professional career in automotive industry along with quite wide exposures of automotive industry in developing countries of both- west and east, any development allures me to write about it. So I wrote on hybrid cars and hydrogen cars. It was great news for me when I read a recommendation of a panel with Ratan Tata as head about hydrogen cars of India. As it appears, India is getting ready for fuel cell cars where hydrogen will be the fuel. With not much of internal fossil oil resource, the country will have to go for the new initiatives. But for the strong lobby of oil companies in US, hydrogen cars would have been reality by now. The middle course is hybrid vehicles where along with the petrol (gasoline) or diesel engine, electric motor and batteries are also incorporated to let vehicle run on electricity at low speeds. Mahindra and Mahindra will exhibit a hybrid Scorpio at the Auto Expo that is starting tomorrow. M&M has already developed the prototype that is undergoing test. As reported, the hybrid Scorpio can deliver about 30-80% more fuel economy. The engine shuts off as soon as the vehicle stops at traffic light, and starts off again with almost no idling that saves fuel. 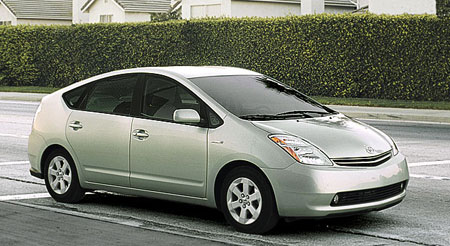 In US I had seen Toyota Prius commercially marketed and pretty popular with Americans. Naturally, hybrids are costlier. I had suggested in my earlier write-up that our government must give all tax concessions to Toyota and other to manufacture proven hybrid cars in India. It would have been a precious fuel saving and the most contemporary technology for the country. Chinese persuaded rather forced Toyota to manufacture hybrids. The car in coming days will have many new features that we could not have even imagined. Anand, my youngest son was describing his driving experience of Toyota Highlander, and just by hearing the whole thing I was getting excited. That had a GPS to guide the vehicle in a pitch dark snowy night, beside providing all other information like hotels of their choice and restaurant to make the long journey a pleasure of its kind. Here are some more developments that you may look for while visiting Auto Expo 2006 in next few days.

Sensors will light up an icon on the instrument panel or sound a warning drone when drivers are veering out of their lane or are heading toward a possible accident
.
2.Horsepower

Even though fuel economy is hot, the horsepower war rages on. Amateur drivers still love to punch the gas pedal, and many newer cars are both responsive and efficient.

3.Air Quality
Germophobes will love new plasma-based technologies that release charged ions to filter out mold and bacteria. The result: Cleaner air inside than out.

4.Diagnostics
Carmakers are offering systems than can run self-diagnostic tests on cars, telling owners when the brakes, engine, or air bags need to be fixed.

5.Sound System
Soon you’ll be able to plug in your iPod or a memory card loaded with your favorite tunes and toggle from track to track using controls located right on the steering wheel. And ISRO is going to provide
easy access to TV channels.

6.Fuel Economy
Hybrid-electric vehicles, transmissions with up to eight gears, and high-tech gasoline engines are slowly but surely delivering the fuel economy gains that were promised back in the ’70s.

7.Navigation Systems
Navigation systems will tell you more than how to get there-soon they’ll tell you how not to get there. They will know where the traffic jams and accidents are, and they’ll eventually be able to tell you to slow down when coming up on a hairpin turn.

Are these not amazing things getting in your cars when you go for buying tomorrow?