Pipra, my village in police station Karahgar in district Rohtas (part of the old district Shahabad, as we knew it then) is known as Mardan Rai ka Pipra. It was also identified by many as Pipra of Jamuna Rai, when he was alive and active. Jamuna Rai was the younger brother of my grandfather, Lakshmi Prasad Rai. As my grandfather left the village for Bengal just after his schooling in search of employment, Jamuna baba managed the family land and cultivation starting at very early age right after his father’s death. He was soft spoken and very generous. He loved me a lot. Jamuna baba had two sons and daughter. The eldest was late Mukteswar Rai who lived with my grandfather at Birlapur, got schooling and worked there till end. His son Pradeep still works with one of the division of Birla Corporation 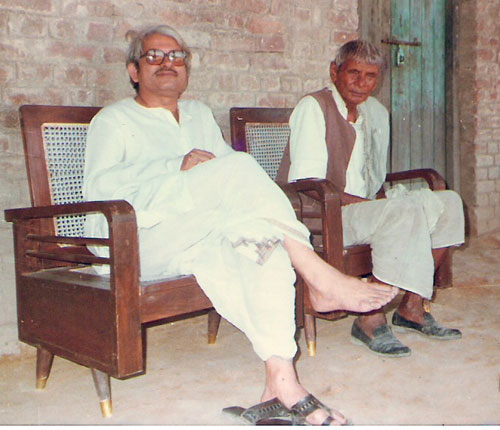 I remember some uniqueness of Jamuna baba. He never went and sat with any other persons in the village. In morning after milking the buffaloes, he would leave our house at Pipra and go straight for Rampur, the next village where we had the major landholdings and a house. I found him responding to any sound in the night or whenever I got up to go out for urinal. I wondered if he at all slept. He was early riser too. We never saw him on his bed after we got up in the morning. He used to go out in the fields for defecation as was the practice in rural India in those days, but no one in the village had seen him going.

I found in my childhood Jamuna baba as the most respected person in the villages all around and sometimes beyond too. Every night we used to see quite a few unknown guests from distant villages taking shelter at our place and getting bed and food. The story of hosting and feeding the whole marriage party going to a nearby village on a hot summer afternoon became famous as legend for his mannerliness. Once Mangla Rai, the famous wrestler of Joga in eastern UP came for marriage of his son in a nearby village. The name of Jamuna baba was so well-known in those days that he called only baba in his tent and met him. I had seen baba sending gift to Mangla Rai, as he started getting invitations from Magla Rai after the meeting.

Baba never wanted to seek any favour from others in the village. In those days in crop time, there used to be a lot of feuds for sharing the water of the canal for irrigation. He bought or exchanged his land, got trenches dug in such a way that he could take water to his fields without asking anyone’s favour. The family had lot of landholdings spreading in at least three villages from south of Pipra to Rampur at the centre and extending up to Pipri, covering about 4-5 kilometers, even after the abolition of zamindari system in 1952. Ours was a peaceful joint family but for his wife. He himself was pretty shore about it. He loved my uncles as they lived in the village with him. His own son, Mukterwar chacha was living with my grandfather for schooling. It was he who arranged and negotiated marriages of all my uncles. My grandfather never interfered with him. And Jamuna baba had immense love and respect for his brother. Unfortunately, few years after the death of my grandfather in 1965, Jamuna baba got the family divided because of his younger son. My youngest Uncle Nand Kishore ji was looking after the affairs at that time. I feel he would not have agreed for that during his life time.

Unfortunately because of the poor yield and very low prices of the produce, our farming was never making much money. None of the family members really worked but for supervision as per the prevalent practice in those days. Expenses were totally uncontrolled. Jamuna baba kept on selling some land. Ultimately that became the shore point and the charge of running the affair was given in younger hand of my uncle, Nand Kishore chacha. But that led to division soon.

I remember vividly the way Jamuna baba cared about my conveniences and food when I used to go there in school holidays. He even drew water from the well and rubbed my back while I took bath on the well or later on tube well. He will arrange a person to give me massage in night when I used to go to bed for sleep. He will keep on talking about the political happenings in the country and even technologies that surprised me many times. Jamuna baba had once visited me in Hindu Hostel when I was in Presidency College. He had come to my grandfather for treatment for his piles. Next time he came along with his personal aid Dukhi accompanied by my mother and a couple of Bodarhi to go for pilgrimage to Ganga Sagar and then to Puri. I arranged them to visit Ganga Sagar by my car. Yamuna accompanied them there and later on to Puri too. Baba was very much impressed by Yamuna and kept on talking about smart way she managed everything in their Puri trip.

I wish I would have done more for him.

This entry was posted in bihar and tagged Pipra. Bookmark the permalink.