Since I reached Patna I wanted to go to the Kumbhrar site- the Patliputra of Ashoka that I had seen briefly some 15 years ago. When I expressed my wish to my host Janardan Sharma, he informed that the place was very near to his house in Kankarbagh. But finally we could make it only on April 23, while returning from Nalanda. I wish I would have not gone there. We bought the entry ticket. Yamuna was tired. We made her sit on a bench in the park. I frantically searched for the hall with many pillars that I had seen, but I failed to find that. I could see only some newly constructed structure that appeared to me the foundation of a new house. As per information provided by the archeological department, it was Gupta-era ruins of Arogya Vihar (“hospital-monastery”) of the noted physician Dhanvantri. I never saw that last time.

What happened to that hall and the numerous pillars that formed the part of the palace? We came near the entrance and asked the person there. He informed that that the archeological department has buried the pillars with sand to protect it from the flooding during rainy season. What a shame! Is this the way to save and respect the remnants of a great civilization? Why couldn’t the department recreate the palace with those pillars?

The Chinese travelers have written vivid and extensive description of Patliputra of the time. Patliputra is a historic city and is not like mythological Ayodhya. It was Patliputra where Chanakya (Kautilya) and Patanjali lived, and wherefrom Chandragupta Maurya and the Ashoka, the Great established the empire covering most of India of today for the first time. Why couldn’t the archeological department do serious work to excavate and protect whatever was discovered about the great city of Patliputra? Is that because of the Buddha’s curse?

The people of Bihar do neither protect nor respect their ancestors and their heritages that they leave behind. I was shocked. Surprisingly, the archeological department charges Rs 5 per Indian and Rs 100 per foreign visitor to see an ordinary park that is presently used by young boys and girls to pass their happy time. 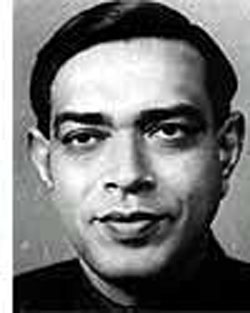 On April 24, when I went for my morning walk, I could reach the house of Ramdhari Singh ‘Dinkar’. I had walked along the road on Rajendra Nagar overbridge towards Ashok Path. When I enquired some persons they told me about the statue of Dinkarji. I, for the first time, mistook it as one of some BSP leader because of its shabby colour combination. I was surprised that even though there was no nameplate or other sign, at least three to whom I enquired about Dinkar Bhawan could tell me the exact place. The people still remember Dinkarji. But neither the government nor the literary elites of Patna could do something to make the house presentable to the fans of the poet who was once called national poet. The house of the poet is in bad shape. Half of it is occupied by some doctor. Why can’t the government acquisition the whole of it and make it a memorial of Dinkarji?

I kept on enquiring and reached to the house of Jai Praksh Narayan too through a narrow lane of Kadam Kuaon. While I was standing in front of the Jai Prakash Narayan house enquiring about it, a student of the school nearby came running to show me the entrance. He had heard me enquiring about it. I felt happy that younger generation of Bihar and perhaps ‘aam adami’ remembers the great sons of Bihar, but the politicians are busy talking big about themselves only. The people are to keep on hearing that and clap too. Recent claim of Railway Minister Lalu Prasad Yadav that the ’70s total revolution against Indira Gandhi government was in fact his brain child that he ‘handed over’ to the Loknayak, is one example of the meanness of the present politicians. Can even a beginner of the political history of India believe such a false claim?

I entered in the house. In some slum like structures in Pravavati- Jai Prakash Smiriti Sanshthan, some families live. One elderly lady helped me to get one of the employees of the Sanshthan with whom I could enquire about one Jagdish Singh who was a personal assistant to JP for many years. J. Singh had visited us too with his adopted daughter who was married SK Singh, one of my subordinates at Hindustan Motors. I have some books presented to JP by the writers that came to me through SK Singh.

I could get some information about the houses of others too: The houses of Dr. Rajendra Prasad and Jagjivan Ram had been sold out, and there is nothing there. I heard abut the poorly maintained Sadakat Asharam and the samadhi of Dr Rajendra Prasad in Patna. His fault was that he decided to move to Patna to live in Sadakat Ashram instead of asking for a government residance in New Delhi.

Perhaps one of the main reasons for apathy towards the great sons of Bihar is the caste-based bias in everything that has taken deep root over the years in Bihar. During my stay in Patna, I came to know of a function to celebrate Babu Kuer Singh’s role in India’s first Independence movement of 1857 being organized, led, and also attended by mostly Rajputs. I can never think that Kuer Singh belongs to only Rajputs, Dr. Rajendra Prasad and JP Narayan to Kayastha, Babu Jagjivan Ram to Chamars, and Ramdhari Singh Dinkar to Bhumihar Brahmins. But I experienced it happening in Patna.

I was amazed when Dr. Sinha, a famous plastic surgeon and a Bhumihar Brahmin himself told me that they were there to garland the statue of Ramdhari Singh Dinkar that morning as it happened to be his death anniversary. They might have been there just after I had left the place. And it appeared it was all Bhumihar Brahmins gathering.

How can Bihar even dream of getting developed with such narrow a thinking in the elite class of the state? Bihar and its people must respect its great sons without any bias of the caste in which they were born. There must be an effort to protect the memories of those sons through well-kept memorials and museums in the houses they occupied.

This entry was posted in bihar. Bookmark the permalink.